The Legend Award is the most prestigious distinction for a JRMC employee. The Legend Award recognizes employees who exceed expectations and make THE difference in the lives of those they serve.

The JRMC Emergency Department and Pharmacy Manager, Brian Ament, nominated Van Fleet and Kleingartner because of their extraordinary work to help prevent their patients from traveling miles for their treatment and going the extra mile to provide the best care for them.

“JRMC received notification that two different patients were to receive a chemotherapy drug on Friday, Oct. 11 at the JRMC Cancer Center,” JRMC Pharmacy Manager, Brian Ament wrote. “Due to the weather, it was unlikely that JRMC would receive the drugs in time. Van Fleet and Kleingartner worked with the vendor, FedEx, Fargo Sanford’s pharmacy and the Jamestown Area Ambulance to safely deliver the chemotherapy drugs, so that the patients could have treatment.”

The purpose of the Legend Award is to inspire, motivate and capture the moments that define JRMC. The goal is to help employees and volunteers connect to the sense of purpose that brought them to the organization. This award is for employees who’ve made extreme efforts to benefit their patients and colleagues.

“The nominations inspire staff members to continually be the best, exceed expectations and make THE difference in the lives of those we serve,” said JRMC President & CEO, Mike Delfs.

Once nominated, both JRMC administration and employees vote on their favorite nominees and their stories.

“Weather-related events bring out the best in JRMC employees. Jayde and Tabitha are an example of the amazing accomplishments and delivery of care from the staff at JRMC during inclement weather. Their quick thinking and actions are celebrated and are part of the JRMC work culture,” said JRMC Chief Operating Officer Ricki Ramlo. “Medical emergencies and cancer treatments do not rest during blizzard conditions; creativity and diligence are paramount as staff provides care in undesirable conditions. Jayde and Tabitha were THE difference to our patients.”

The Legend Award first began in 2012. Since then, more than 40 individuals have been named Legends and more than 112 employees were nominated.

On Wednesday, Oct. 9, Jamestown Regional Medical Center received notification that two different patients were to receive a chemotherapy drug on Friday, Oct. 11 at the JRMC Cancer Center. JRMC Pharmacy does not routinely stock and this medication, so the pharmacy team ordered it for delivery the next day.

That Thursday, Tabitha Kleingartner, pharmacist, and Jayde Van Fleet, pharmacy tech, tracked the FedEx shipment to ensure its on-time arrival. Throughout the day, the shipment was listed as ‘out for delivery’ until 4 p.m. when the status changed to ‘at FedEx facility’. Even though the end of the day neared and a storm was coming, Kleingartner contacted FedEx regarding the medication. The medication would not arrive at JRMC that day. And because the medication requires refrigeration, FedEx was returning it to the vendor out of state, further delaying delivery.

Receiving chemotherapy treatments on schedule is imperative to a patient’s success. Cancer treatment is designed to kill as many cancer cells as possible. Missing treatments means the cancer cells have an opportunity to continue to grow. Those cells may become more resistant to treatment. Timely treatment improves survival.

Knowing this, Van Fleet called the vendor to see when the next shipment could get here. Due to the weather, it was unlikely that JRMC would receive any product until Tuesday, Oct. 15 – delaying a patient’s care by at least four days. This did not seem like a reasonable time for someone to wait for chemo. Kleingartner worked with FedEx to have the package held in Fargo for pickup until 6:30 p.m. while Van Fleet worked with Sanford’s Pharmacy in Fargo to have them store the medication with the hope that the courier could bring the drug on Friday.

Kleingartner contacted her sister who lives in West Fargo to pick up the medication at FedEx and bring it to Sanford’s Pharmacy for safe storage.

Once all of this was settled, Kleingartner noted that one patient was scheduled to receive the medication at 8 a.m. the next morning. It was the end of the day and she was concerned that the patient would drive to JRMC only to find that the treatment had been canceled. She called the patient to reschedule the appointment until the medication was available.

Had JRMC not received the medication that weekend, the patients would have needed to travel to Fargo for treatment or delay their care. Kleingartner, Van Fleet and Jamestown Area Ambulance’s ensured these patients received the care they needed, close to home.

Jayde and Tabitha, you are THE difference at Jamestown Regional Medical Center. 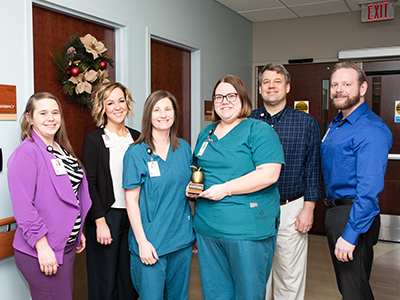